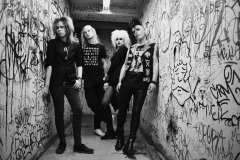 Virgin in Veil released its first demo two months after the band came to life and started playing gigs in Finland as well as in nearby countries. A few months later, the band published an 4-songs e.p. titled "The Glory Hole". Initially self-released on CD and quickly out of print, a 7" vinyl version of the record was subsequently released by Finnish label Fairy Dust Records in May 2016.

After countless gigs in Europe, Russia, USA and Mexico, the four musicians were offered a record deal by Danse Macabre Records. "Deviances", the band's debut album, was released by the label in October 2016. Many more live performances followed, including a packed show at Wave Gotik Treffen 2017. Virgin in Veil's sophomore album is scheduled for released in fall 2017.

Virgin in Veil's mix of catchy decadent melodies and fast beats - as well at its members' debauched behavior on and outside of the stage - have granted the band to be acknowledged as one of the most interesting deathrock bands of its generation.